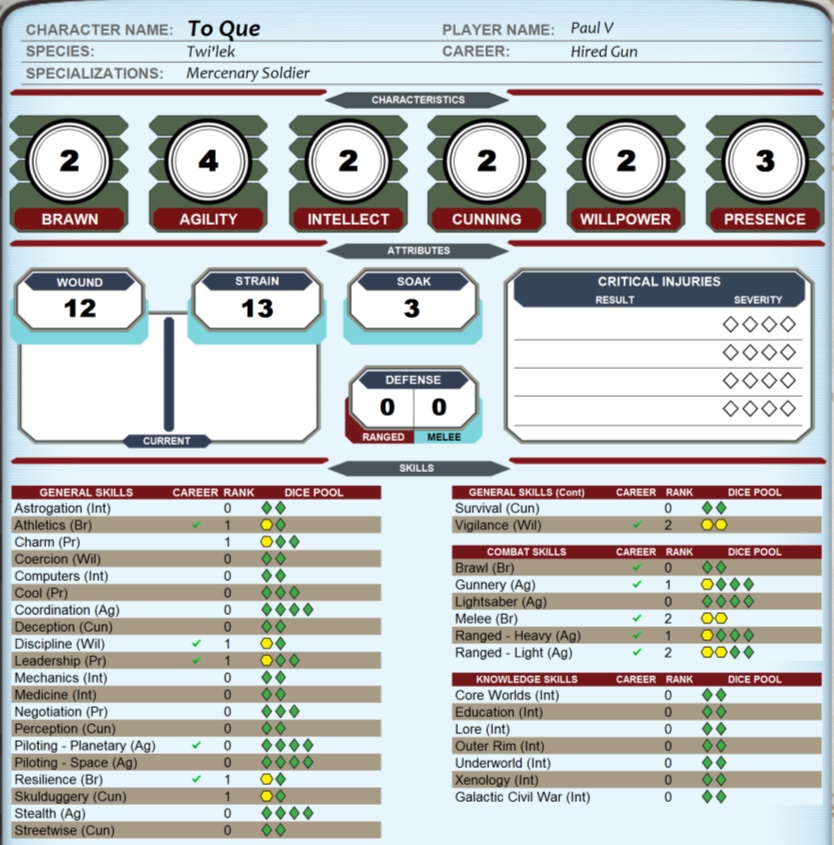 You know, that planet Ryloth? Arid, full of dirty Twi’Leks, Ryll spice, mobsters. A big mudhole with some patches of actually livable climate. Not that any Twi’Leks would live there. It’s no picnic. But when you’ve got nothing, and never had anything, maybe you just don’t know better.

Orisen is a mine tenement on the Faltine Ridge. Not actually in the livable patches of the planet – those are too valuable to mine. Shacks were built on the lee side of a giant pile of mine spoil, to shield from the trade winds that ravaged the arid plains during the “dry” season. Those that can’t afford to piece together a shack actually burrow into the unstable, ever expanding pile of mine waste. But you were there for one reason, and one reason only – to work the mines.

Reth’al’Zei was regarded by all around her as a beauty. Which, for a race deemed as sensual as the Twi’Lek, made her quite the commodity. But the first Weequay mine bullyboy found that this one had some claws to her. Fortunately, this Weequay was quite the screw up – to punish him, the slave was not killed. Instead, she was maimed – no one would call one branded and scarred as her beautiful again. She was sent to work in the mines, away from the comfortable service in the mine overlords’ quarters. There she meets To’Zon, and nature takes its course.

I like to say that I was born in the mine itself – 400 zen below the surface, by the light of a lantern only and with naught but a scared child used to planting explosives to assist her. But that would be a lie. It was a difficult pregnancy, and the birth came – and took Reth’al’Zei into shadow with it.

It was not the way of the mine owners to allow the miners possession of their own children – they were hostages, and “child care” was the excuse to get the slaves back work. I was taken into a crèche, cared by a Ryll-addicted bitter Twi’Lek matron and sterile, impersonal droids. When he can be trusted to follow instructions, I am sent to the mines. Young, nimble children are needed to plant the explosives to open up the veins of ore, and we can fit in places that the adults cannot. I thrive in the challenge – the risk. My survival proves me better, superior even. I am singled out for more skilled work – I had found a place, a little glory. When you have always had nothing, you don’t regret having nothing.

Like most stories, this one turns on a girl. My burrow in the spoils pile was suitable for more than just me, and I had my eye on one – her skin the perfect shade of unripened civas fruit, her eyes alive with joy, even in the toil, not deadened by the Ryll, as many were.

It was not to be. A mine bully boy – it was a Weequay, Billik – encountered this muse on a dark night. The color of her skin was obscured by purple bruises, her eyes would shine no more.

Three days later, I was found a bloody mess, in shock, my hands wrapped so tightly around a pry bar that my fingers were white with lack of circulation. Billik the Weequay is found behind the motor pool in a pool of blood – not dead, but certainly not likely to be a useful bully boy for quite a while.

Hutt justice is swift and merciless. But a useful tool is not to be thrown away – I had good knowledge and skill in the mines. I just needed motivation.

I was given work in the most dangerous parts of the mines, along with the other undesirables. Shitty work, likely to kill us.

That’s where I found my sonna, my purpose.

Kar’Pell had been on this detail for ten years. Longest anyone had been. He was a mean, crusty bastard. But he had heard the words of truth, and passed them on. It had been a bully boy, oddly enough, one punished with working in the mines, that he had heard it from. An Ithorian (though he had no idea what an Ithorian was), by the name of Kakkosen, had a dream. Where the toilers would share properly in the spoils of their labor, not restrained by the bully boys and the vile Hutts. We seize an opportunity – a cave in is planned, and the Kakkosenites of Orisen flee into the Ryloth wilderness.

To make the revolution a reality, it would be work. After all, when you never have had anything you don’t know any better. And they would have to take all that they had away to get them to fight. Stealth would be their ally, like the pinyg rodents, who seemed always to infiltrate wherever grain was stored. They begged, they borrowed, they stole.

But it was time…time to escalate. They had stolen some weapons, and there were plenty of hot headed fools to go around. It was a caravan of skiffs – carrying Ryll spice across the wastes to a spaceport.

The caravan is guarded. Heavily. They attack anyway. Some fall. More fall. To’Que runs, leaving his comrades, his andas behind.

Here’s a thing about Hutts. They didn’t become the top, um, slugs of the galactic criminal underworld by being stupid, or by being soft.

A posse of Weequay bully boys, searching for escaped slaves, finds him, wandering in the wastes three days later. He sings to them, even before he is touched. He is brought before Vanagar the Hutt, the capo running the mines for Hulegu the Hutt. He is marked for his foolishness in attacking something that belongs to the Hutts – tattoos, bright blue, over his face, contrasting against his dust colored skin.

He is sent to a Hutt moon – the ice moon of Sord Suffugnoff, where Hutt slaves are scared into bed about – where slaves are sent as an example, and the stories are passed by the bully boys who return from there.

But the revolution – it is in fertile ground here. The lessons of Kekkosen area already rooted here. The cabal of the slaves welcomes him, and they bide their time against the Hutt oppressors.

It would be a pipe dream. A freighter would arrive, to relive the mine of its ore. The cabal would create a distraction, and To’Que would board the ship in stealth.

The freighter Hard Knox was captained by the Corellian Cobin Starslide; he ran a simple affair, a one-man, one-droid craft. Amid the chaos of the distraction, Starslide is cleared to leave the ice moon. I saw his face when he saw me amid the crates. A filthy Twi’Lek, with the mark of a prisoner on his face.The Corellian pitied him, and on the Hard Knox he learned of a new life, a life on his own. A tattoo “artist” disguises his tattoos with a symbol of his own design. But it would not last forever. Starslide still was a creature of the Hutts, and when faced to pay on a debt, he gives up the “former” slave.

So Teemo the Hutt of Tattooine comes into possession of the Twi’Lek, until the next opportunity to escape, at least. 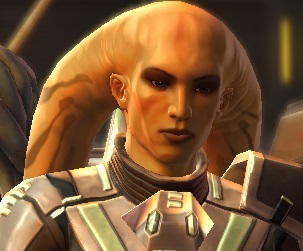