Brown fur, turning black from his face to Chest back and upper arms, around his eyes, nose and mouth the Fur has turned white

10 years ago, not so long in the lifetime of a Wookie, Bob was the latest in a family line charged with tending and protecting a record of his family, village and clan called the Song of the Ancestors. [Something like a Torah: A big scroll or some such with a written and/or pictographic record of the deeds of the clan.] He was looking forward to accepting his traditional role as well as settling down and starting a family of his own. But then, the Empire decided to teach these unruly hairbags a lesson. They attacked and burned the village and took the Song of the Ancestors. The image of the whole thing that stuck in our hero’s mind was the officer in charge: a dark skinned man with an eyepatch.
He changed his name to Kalkabukk “Rage of the Ancestors” and swore to retrieve the Song and make the dark skinned, one-eyed man pay. Unfortunately, since then he’s mirrored Inigo Montoya. It’s been 10 years and he’s starting to lose heart. At the time, all humans looked the same to him, so he’s unable to describe him beyond the dark skin and eye patch, but knows he will recognize him when he meets him again. Another cause for concern is that his coat is changing color. While it used to be entirely brown, it has started to turn black. It started with his face and has now spread to his chest, back and upper arms. And now the fur around his eyes, nose and mouth has turned white. So now when this normally jovial Wookie is in a foul mood – which is more often than he would like these days – his face almost looks like a skull. 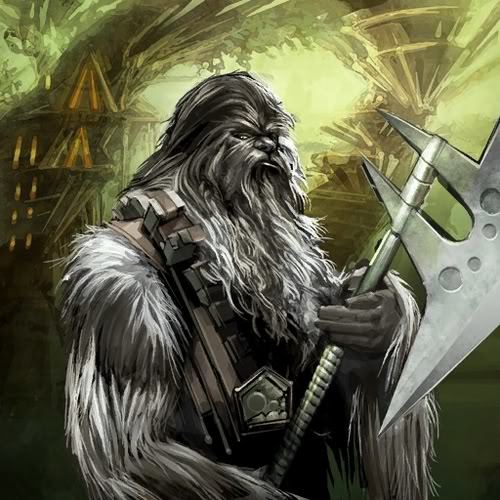